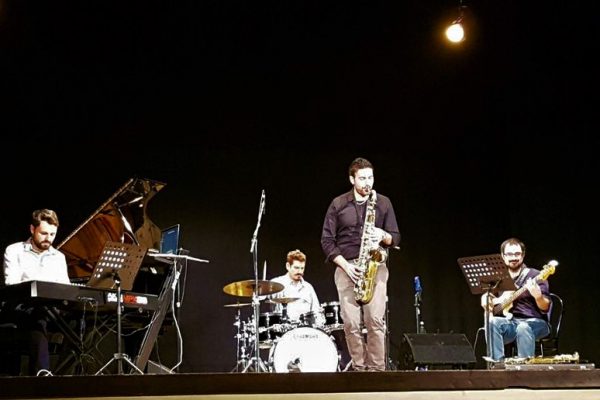 Apramada Project is a project of four talented musicians coming from various backgrounds and who bring together their experiences and ideas to form an original band with a strong sound. The name, inspired by Buddhist philosophy, means “conscious thought” and it depicts the ultimate state of the monk’s journey towards enlightenment, when, shortly before reaching the state of Buddhahood, he consciously succeeds to clear and to control his thoughts.

Apramada Project is intended as a real musical journey, a project to be realized in a spiritual and conscious way. The aim is to convey one’s thoughts through the energy of sound.

The original songs often preserve symbols and messages hidden behind immediate melodies. The symbologies and titles of songs, the melodies and rhythms refer to a centuries old philosophy, very dear to the author. Every single idea enunciated by the soloist or other component and is always sifted and elaborated, worked with a wealth of details, intensi fied or diminished with a wide use of dynamics. The listener is launched in a whirlwind of ideas where the only and sure message he receives is the purity and sincerity of the musical energy that is supported by the rocky rhythm of Bruno and Brambilla and it claims to go straight to the heart of the listener.
In July 2016 Apramada recorded their first original album Darshan.

Darshan wants to be a musical and intellectual journey to discover concepts of Eastern, Indian and Tibetan culture in particular. The record consists of eight tracks. All that which concerns the composition, the titles and the execution is seriously pondered and weighted to convey a very precise message.

Apramada: The first piece that opens the record and gives the group its name means “conscious thought” in tibetan and is the last state of the monk before enlightenment. From this we can guess the reason for the name of the group, where Santangelo sees not a quartet, but a real path to go to with his band members.

Brahman: In Vedic texts this term refers to the cosmic union from which everything comes and will return. To begin the journey and take the first steps one must be aware of his actions and purposes. The only conscience will make everything move so that what you want inevitably happens. Darshan: from the many theological and verbal meanings, it means “to look directly” where this term it is needed to highlight the importance of the direct experience of spiritual learning to rejoin Brahman.

Atman: Which means “breath of life”, It is the archetypal meaning of Anima, and therefore of the divine substance that it is enclosed in man and pushes us to experience it. Dharma: translated as Cosmic Law in which all the perceptible reality manifests itself and is experienced by Atman, the breath that is embodied and conforms to the rules to violate and to emancipate them.

Ananda: Translatable as “a state of profound bliss”, in which the breath Atman finds his way through the Dharma to return to the Bramhan

Samadhi: Means to unite, here in the musical meaning uniting the meditator with the object of his meditation (Brahman).

Tutto e’ Uno: The last song is not by chance in Italian and not by chance is the eighth one, the number that returns and returns everything to the beginning. This concept is derived directly from the holographic conception of the universe by David Bhom, where the author wants to underline how, in any language we seek it, and by any means, scienti fic or sacred, we cannot do anything else but to return to the main root – oneself – as a substance and part of God. From here, the subtitle given to the record is explained (The one who seeks he’s the one who’s sought).

X
We use cookies to make sure you can have the best experience on our site. If you continue to use this site we will assume that you are happy with it.OkNoPrivacy policy
Revoke cookies