Giuseppe Santangelo is a saxophonist, composer and professional flutist.

Born in Sciacca in 1981, he fell in love with the saxophone after listening to John Coltrane. He then began to study as a self-taught musician and later with great masters such as Orazio Maugeri and Giulio Visibelli.

He attended Musicology courses at the University of Palermo, graduating in 2007 with a thesis on Jazz with excellent results. The thesis title was: “Jazz: Forms, Structure, Language” in which it is expressed in a technical and detailed way how jazz music is seen from the analytical point of view of the ones who make it. During the last University year, he moved to Milan to continue his studies and improve himself and he joined the Civic School of Jazz in Milan and then he immediately joined the Civic Orchestra: he performed there as a tenor and was active on the National territory and in concert seasons of Piccolo di Milano. He worked, among others, with great artists such as Enrico Rava, Fabrizio Bosso, Jimmy Heath, Percy Heath, Massimo Nunzi, Paolo Silvestri and many other leading members of international jazz.

He graduated in sax in 2010 and participated in various festivals and contests around Italy with a great response from the public and critics. He then began to compose his own music, constructing it around philosophy, in the search for being understood as a self, in numerology and esotericism, in the sense of unknown or secret. 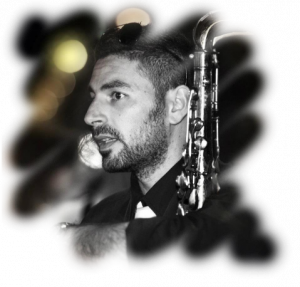 He is currently involved in several musical projects:
Il PEPPE SANTANGELO NU QUARTET, in the new album “My name is” the saxophonist reelaborates and revolutionizes the ideas of the great masters who have influenced him.
With APRAMADA PROJECT he registered Darshan, and two other records are in the making. Here the Philosophy of Santangelo is outlined and, also, the hidden, almost sacred message of his music.
With STREET-WISE QUARTET, founded together with Giovanni Sanguineti, he recorded the record “Trust”, which includes nine entirely new tracks in which emerges the experience and wisdom (hence the name of the project) of the two leaders, gained in years of study and experience on the road.

Santangelo explains his interest in this way:

X
We use cookies to make sure you can have the best experience on our site. If you continue to use this site we will assume that you are happy with it.OkNoPrivacy policy
Revoke cookies